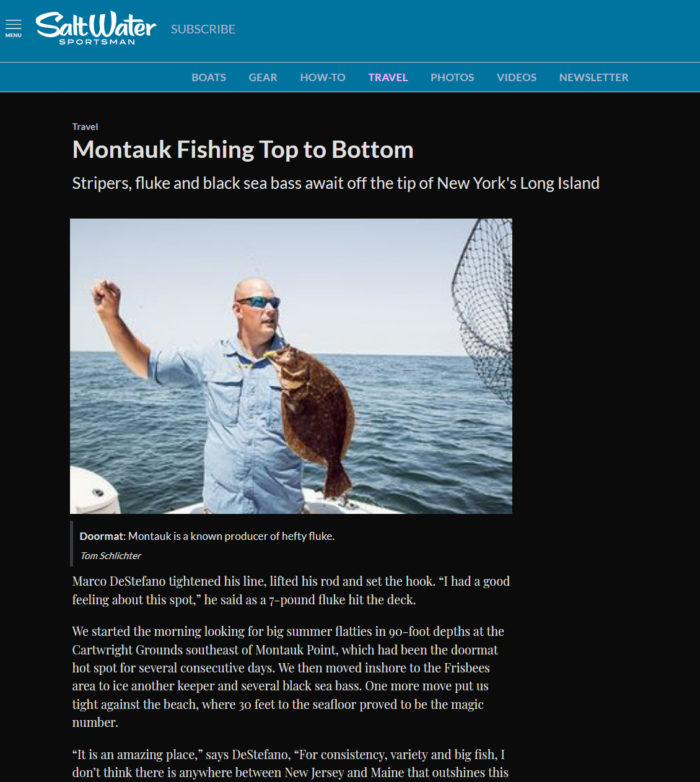 Marco DeStefano tightened his line, lifted his rod and set the hook. “I had a good feeling about this spot,” he said as a 7-pound fluke hit the deck.

We started the morning looking for big summer flatties in 90-foot depths at the Cartwright Grounds southeast of Montauk Point, which had been the doormat hot spot for several consecutive days. We then moved inshore to the Frisbees area to ice another keeper and several black sea bass. One more move put us tight against the beach, where 30 feet to the seafloor proved to be the magic number.

“It is an amazing place,” says DeStefano, “For consistency, variety and big fish, I don’t think there is anywhere between New Jersey and Maine that outshines this place.”

The ocean bottom here is scoured with cuts and gouges, hills and valleys, ledges and shoals, boulders and rock piles. A huge deposit of ancient terminal moraine pushes out toward the open Atlantic while bottlenecking the tides of both Long Island and Block Island sounds. The rapid changes in depth and structure cause the strong currents, sharp rips, and a vibrant, sea.

You can read the full article here.

Misty Dawn II mission is to provide its customers with an enjoyable exciting experience and relaxing time on the water, while catching fish and exploring the beauties that Montauk has to offer.